The Town of Trebic

The earliest records we have of the Kurrein family relate to Trebic. Adolf Kurrein was born there, and told his son Max that he had seen family gravestones in the cemetery here dating back to the 1600s, the oldest of which was for a man from the area of Gurein, near Brno. Might this be a reference to the town of Kurim, about 10 miles West of Brno? Certainly there are references to there being a shtetl (Yiddish for a small Jewish town or village in Eastern Europe) here.

Adolf also said that the gravestones had been destroyed when the cemetery was re-located. More recent information indicates that the present cemetery still contains gravestones of this age. A visit might be interesting!

The map below is of the Jewish Quarter of Trebic. 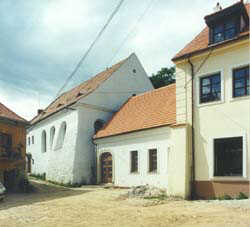 The 'Back' Synagogue is right in the middle of the former Jewish Ghetto. It is located at the foot of a rocky bluff in the setting of a regular city neighborhood. Despite most written records dating its foundation at 1737, it seems right to assume that the basic structure of the synagogue was built in late-Renaissance. According to construction designs from 1837 a new part of women's tabernacle was added to the northern side of the synagogue at a raised level adjoining the rocky bluff.


Shortly after World War I the synagogue ceased to serve religious purposes, being utilized as a storehouse instead, since 1926 by the I.H.Subak and Sons Company and after the war by the Zelenina Trebíc Company. Between 1987 and 1988 the architect Harald Cadílek devised a renovation scheme of the synagogue, revising it between 1991 and 1992. In the revised version of the scheme Harald Cadílek showed greater respect for surviving artifacts of historical interest, most notably the unique wall paintings. The renovation was finished in 1996 with a ceremonial opening.


The Back Synagogue is a one-story building with a rectangular ground plan and a ridge roof. Its southeastern corner rests on a sturdy pillar. In its southwestern side the entrance to the synagogue takes the shape a stone portal with relief decoration. The porch with groin vaulting is connected to the main nave through three vaulted archways. The main nave has barrel vaulting with Baroque stucco decoration, its walls carry texts in Hebrew as well as ornamental and flower motifs. The nave is lit through five tall lattice windows with semicircular apexes. Women's gallery has barrel vaulting with lunettes. The gallery opens out into the main nave through three archways. Women could enter their tabernacle using a staircase located between the western wall and the adjoining building.


When the synagogue stopped to be used for religious purposes, i.e. at the end of the World War I at the latest, this staircase was incorporated into the adjoining house and the gallery was made accessible by means of a wooden staircase placed inside the synagogue.


Nowadays the synagogue is used as a multipurpose building, most notably for exhibitions, chamber concerts, various gatherings and symposiums. 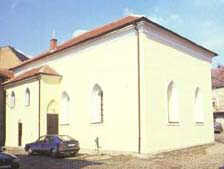 The present-day 'front' synagogue on the Tiché Square (Tiché námestí) was built between 1639 and 1642. A contemporary report had it that in 1757 the synagogue had to be lowered because it dwarfed the surrounding houses and the ceremonial lighting of its interior was visible from miles off, marring Maria Anna's scenic view from the Trebíc Castle. Maria Anna, by birth the Princess of Lichtenstein, was the wife of the owner of the estate Emanuel Filibert.


The old synagogue had to be repaired in the aftermath of the fires in 1759 and 1821 and thoroughly renovated in 1856-1857 when it probably acquired its retro-Gothic style windows and pointed arches characteristic of its present-day appearance. Further partial changes in the appearance of the synagogue were made in 1880 and 1922. During the World War II the synagogue was damaged by Nazi troops, being used as a storehouse. In 1952 the synagogue was sold to the Czechoslovakian Hussite Church, which adapted the building to suit their religious service. The Front Synagogue had basically the traditional character of a simple, free-standing, one-story building with a rectangular ground plan and a hip roof.


The layout of the synagogue's interior was influenced by Christian temples: the building was entered through a small porch located in the western wall, a raised pulpit was placed beside the tabernacle on a small platform with a semicircular balustrade. According to the traditional Jewish religious service men pray separately from women. Wooden benches for men were arranged lengthwise along the longer walls of the synagogue and below the gallery. Women could use the outer staircase to get to the gallery located on the second floor. The balcony of the gallery was supported by two massive pillars. The main nave had a tub-shaped vaulting and was lit from three sides, through two tall windows in each side. 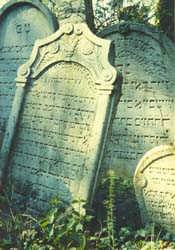 Most Jewish congregations have their own cemetery. In the past the master of the estate had to be asked first to give the green light to the foundation of a new cemetery. Therefore, Jewish cemeteries used to be located far away from the city or village to get it out of the sight of other people. In some regions such a cemetery could be founded only in a despised place, for instance next door to the scaffold.


Trebíc Jews buried their deceased in a stretch of land near the rampart of the Benedictine Monastery. Their burial ground was closed down either due to having been destroyed by rampaging Hungarian troops in 1468 or by order of Katerina of Valdtejn, the owner of the estate, in the early 17th century. A new Jewish cemetery founded on the off-the-city facing slope of the Hrádek Hill above the Týnský Creek (Týnský potok) was enclosed by a stone wall. It was substantially enlarged in 1888 by purchasing an adjoining stretch of land. Up to 11,000 people are buried here, the cemetery contains 3,000 gravestones whose various ornamental designs represent the development of designs of Jewish gravestones. Jews had a superstition that tombs should not be moved around.


Therefore, every time the cemetery was pressed for space, tombs were placed one on another in layers with gravestones being raised up a little bit. The cemetery is approachable from Hrádek Street (ulice Hrádek) through a wrought-iron entrance gate. Beside the gate is the funeral hall built in 1903 whose interior decoration and furnishings have survived almost intact up to the present. One of the most precious items is a decorated porcelain washbowl that served for ritual hand-washing before ceremonies. Furthermore, two stone boxes for donations can be found at the entrance to the cemetery. In the northern, oldest part of the cemetery the old Jewish tombs have Renaissance tombstones. These were brought here from the closed-down cemetery.


The tombstones carry inscriptions in Hebrew. The names engraved on the stones are mostly Czech.


Modern gravestones tend to be larger, they usually have the shape of an oblong planted lengthwise, exceptionally they can have the shape of an obelisk. Their inscriptions were mostly engraved in German and only rarely ornamented. Jews used to visit graves very frequently. They would bring from their homes stones and put them on the graves of their deceased as a token of respect.

Thanks to the Trebic City Council for the right to reproduce the above.