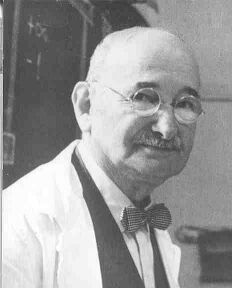 Max married Charlotte ("Lotte") BLAU, daughter of Dr. Louis BLAU and Bertha FISCHEL. Charlotte BLAU was born on 25 November 1894 in Berlin and died about 1978 in Haifa, Israel. Their engagement picture, below, was taken in 1917 when Max had been conscripted into the Austro-Hungarian Army to run a munitions factory. 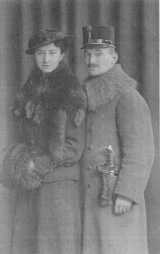 Prior to his marriage Max worked for a number of years as a research engineer in Birmingham UK for the weighing machine manufacturers W T Avery. Avery acquired the business of James Watt & Co (of steam engine fame!) shortly before Max was employed. This included the famous Soho Foundry pictured below in 1907. Whilst in Birmingham he obviously enjoyed a game of tennis, as shown below in 1905. Like his mother he was a snappy dresser. He certainly dressed the part when on holiday on the Baltic coast!

Max obviously liked a bit of fun. He was a member of the "Schlaraffia" in Dusseldorf in 1910. This was a German/Austrian (and now worldwide) male social club with the motto "friendship, art, humor". It was founded in 1859 in Prague. A high society arts club, "Arcadia", which had members of the nobility from the Hapsburg monarchy, rejected the membership of Albert Eilers, who later was selected by Wagner to sing the role of Fasolt in Bayreuth. His fellow German artists, performers at the German Theater in Prague, saw the rejection as a wanton act of snobishness and promptly formed their own club, the first "Schlaraffia". It translates as a "fairy tale land", and is an intentional spoof of the old aristocratic structure complete with pages, knights, majesties, thrones, castles and the like along with the rituals of those aristocratic times.

This is Max in his costume (captioned "Junker Maki" - Squire Maxy?) and. alongside, his tankard.

Max was conscripted into the Austro-Hungarian Army, together with his brothers. Clearly there was no "Jewish Problem" then! Here are Isidor, Max and Herbert in uniform. Isidor is in the Landwehr Schematismen of the day. He was a Regimentsarzt or medical officer in the rank of captain in the Austrian Landwehr having been promoted to such on the 1st of May 1917. Max holds the rank of an Oberleutnant, or 1st Lieutenant, whilst Herbert that of Fähnrich, or Cadet Officer. They all wear pike or field grey service dress uniforms and although not discernible from the photo, Max held the Golden Military Merit Cross with Crown amongst his other decorations.

As a consequence of his engineering skills Max was placed in charge of cartridge production at the Vienna Arsenal, where he is credited with increasing output to 16.500 cartridges per 8-hour day.

Max was a brilliant engineer. He wrote several books, and hundreds of academic papers. He was also the holder of several Patents. Some of these books and Patents are reproduced below.

Following a degree of persecution by the Nazis (arising from a legal dispute in which Max, as a Court appointed expert, had found in favour of Gilette against a  German company in a patent action) Max and Charlotte gathered up their children and belongings and moved to Palestine in 1934. Further details of this dispute are in the extensive biography below.

Shortly before doing so Max received the letter (below) from Chaim Weizman, a scientist (founder of the Weizman Institute in Rehovot, Israel) and politician, the first President of Israel, who was instrumental in the establishment of the State of Israel.

The last leg of that journey was by boat from Marseille, and is recorded in the ship's Passenger List.

Max continued his research and teaching in Palestine, as a Professor at Haifa's Technion. His knowledge of cartridge production from WW1 was then turned to assist the Allied Forces in WWII with the publication of the paper illustrated below in "The Machinist" on 4th November 1939. He didn't waste any time! This method produced 40,000 rifle cartridges in 8 hours, or 30,000 artillery shells. 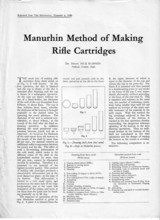 There is an extensive biography of Max's technical accomplishments that was recently published, as part of a larger work on Georg Schlessinger, in Germany. A translation of this is available here.

The following is a brief article on Max from the UK Jounal "Metallurgia", May 1963.

Max KURREIN was born in 1878 and began his technical education with five years in the Technical High School, Prague: there he gained his Dr. Techn. From 1900 to 1904 he was apprenticed in engineering works and towards the end of that time began teaching in the Technical High School, Brunn. He came to England in 1905 and from that date until 1909 was on the design staff of W. & T. Avery, & Co., Ltd., Birmingham. Returning to the Continent he was from 1909 to 1911 assistant to the head of the testing machine department of the Dusseldorfer Maschinenbau A.G. From 1911 to 1913 he was chief engineer of the Machine Tools Research Establishment located at the Technical High School, Charlottenburg, Berlin, where he carried out a great deal of vital research.


In 1934 Prof. Kurrein was responsible for the opening of the Machine Engineering Section of the Technion Haifa. There he was faced with almost overwhelming odds. For example, a new language, Hebrew, which at that time did not even possess technical terminology; very old equipment; and a serious lack of money with which to acquire modern machine tools and instruments. However, through following years and until his retirement as Dean of the Engineering Faculty two years ago, matters greatly improved. Equipment of the best has been installed and this division is the largest in the Institute.


In 1958 he came to Europe, on being invited to lecture at the Technical High Schools of Zurich, Munich, and Delft. He was then 80 years old. He was also invited to participate in the Symposium on Gearing sponsored by the Institute of Mechanical Engineers, in London.


Although he has now retired from active lecturing, Professor Kurrein still spends, three days each week in his laboratories at the Institute of Technology, where he continues his private research. He has published many papers and books. The first book was "Press Tools and their Workings" (Julius Springer, Berlin) 1926, and this became the "Bible" of all press men. "Multi-tool Automatics” followed in 1929, and in 1940 the work "Cutting Tools for Metal Machining" (Charles Griffin & Co. Ltd.) which was written in collaboration with the late Professor F. C. Lea.


In May this year his most important book appeared under the title "Plasticity of Metals" (Charles Griffin & Co. Ltd.). This book outlines and offers proof of the theory he has evolved from long research into the relationship between macro- and micro-structures in metal in plastic deformation. This theory holds that every instance of fracture - whether in bending, torsion, sheer, or even in compression - can be reduced to a fracture of the metallic grains in tension. Such a book, beyond forming a unique record of a lifetime's work of planned research in mechanical engineering and metallography, will greatly assist the metallurgist and engineer in dealing with design problems in metal forming and machine toot design.